KnowBe4’s “The Inside Man” Series Wins a Silver Telly Award

“The Inside Man” recognized in the non-broadcast: employee communications category 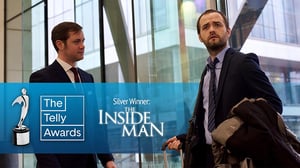 “We’re honored to be named a winner of a silver Telly Award,” said Stu Sjouwerman, CEO, KnowBe4. “This is the second award that ‘The Inside Man’ has won and speaks to the unique nature of this network-quality security awareness training series. We look forward to continuing to bring our customers always fresh content to help them make better security decisions every day.”

“The fact that we were selected as a winner from over 13,000 entries for this year’s Telly Awards is incredible,” said Jim Shields, creative director, Twist & Shout Communications, a KnowBe4 company. “’The Inside Man’ was created to provide organisations with a more engaging way to start the right kind of conversations about security awareness training. We plan to bring even more seasons of this popular series to KnowBe4’s customers.”

“The Inside Man” is a custom, network-quality video series, now with two seasons, created by Twist & Shout Communications, a KnowBe4 company. The series is about an IT security analyst starting a new job where no one suspects he’s already inside their most secure systems or that sinister forces are pulling his strings. The exclusive KnowBe4 series delivers an entertaining, movie-like experience with a compelling story that will engage users and create fans. From social engineering to passwords, to social media and travel, The Inside Man reveals how easy it can be for an outsider to penetrate an organization’s security controls and network. And, more importantly, it wrestles with the human cost of cybercrime. This content is available to all diamond-level KnowBe4 subscribers. Watch “The Inside Man” series trailer here: https://www.knowbe4.com/inside-man.

View all of the winners of the 40th Annual Telly Awards at www.tellyawards.com/winners.

KnowBe4, the provider of the world’s largest security awareness training and simulated phishing platform, is used by more than 33,000 organisations around the globe. Founded by IT and data security specialist Stu Sjouwerman, KnowBe4 helps organisations address the human element of security by raising awareness about ransomware, CEO fraud and other social engineering tactics through a new-school approach to awareness training on security. Kevin Mitnick, an internationally recognized cybersecurity specialist and KnowBe4's Chief Hacking Officer, helped design the KnowBe4 training based on his well-documented social engineering tactics. Tens of thousands of organisations rely on KnowBe4 to mobilize their end users as the last line of defence.