KnowBe4, the provider of the world’s largest security awareness training and simulated phishing platform, today announced it has released results of a new global survey in Australia called What Keeps You Up at Night. 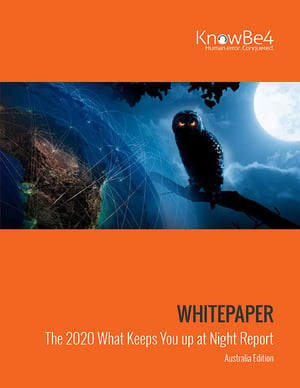 In this survey, KnowBe4 looked at six different perspectives of security concerns, including attack types, security initiatives, compliance security, user-related issues, resource issues and executive-level concerns. The global survey had a total of 914 respondents from Australia, the UK, Germany, the Netherlands and South Africa, with 114 organisations across Australia participating and coming from the top five verticals in technology, engineering, education (K-12), government and transportation.

Highlights from the survey include:

“Concerns over cyber attacks have increased exponentially because the threat actors are getting even more sophisticated and persistent,” said Karina Mansfield, managing director for Australia, KnowBe4. “COVID-19, which has forced many organisations to move to a remote workforce, has seen a rise in cyber criminals going on the offensive and taking advantage of the situation.”

“I was happy to see that over half of the organisations we surveyed in Australia had implemented security awareness training as part of their overall security programs, but training needs to be consistent and frequent in order to be effective,” added Mansfield. “When addressing the issues that most concern our cybersecurity workforce, a few important points to remember are to have and execute a security strategy, get executive buy-in, obtain necessary budget and implement a security culture.”

To download the KnowBe4 What Keeps You Up at Night report for Australia, visit https://www.knowbe4.com/hubfs/WhatKeepsYouUpatNight-AU.pdf.

KnowBe4, the provider of the world’s largest security awareness training and simulated phishing platform, is used by more than 33,000 organisations around the globe. Founded by IT and data security specialist Stu Sjouwerman, KnowBe4 helps organisations address the human element of security by raising awareness about ransomware, CEO fraud and other social engineering tactics through a new-school approach to awareness training on security. Kevin Mitnick, an internationally recognized cybersecurity specialist and KnowBe4's Chief Hacking Officer, helped design the KnowBe4 training based on his well-documented social engineering tactics. Tens of thousands of organisations rely on KnowBe4 to mobilize their end users as the last line of defence.