KnowBe4 Releases New Security Research Report “The Department of No”

KnowBe4, the provider of the world’s largest security awareness training and simulated phishing platform, today announced the release of a new report that explores how and why the reputation of security departments have traditionally been perceived as “The Department of No.” 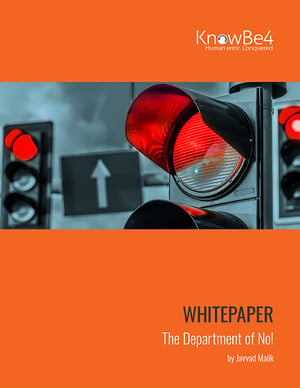 This new report, authored by Javvad Malik, security awareness advocate at KnowBe4, explains how many security teams face a reputational challenge within their organisations. Because they are responsible for the well-being of the organisation at large, they often receive unwarranted backlash from other departments that grow discouraged by the constant precautions that frequently shut down business operations that pose security concerns. The “Department of No” report provides key insights into how to establish a positive, effective and generally successful security team at the base of an organisation.

“I wanted to look further into why security departments are often perceived as barriers to business rather than vital partners,” said Malik. “This report walks through the habits of successful security teams and the secret sauce that makes them work. The methodologies they've deployed could work for your organisation as well and transform employees’ entire perception of security.”

Malik includes analysis of data from a soon to be released CLTRe (a KnowBe4 company) survey that provides information about security culture across more than 20 countries. The 2020 survey collected data from 120,050 employees working across 1107 organisations, and the responses have brought researchers closer to understanding employee relationships with IT departments in general.

To download “The Department of No” report, visit https://www.knowbe4.com/hubfs/The-Department-of-No-UK.pdf.

KnowBe4, the provider of the world’s largest security awareness training and simulated phishing platform, is used by more than 33,000 organisations around the globe. Founded by IT and data security specialist Stu Sjouwerman, KnowBe4 helps organisations address the human element of security by raising awareness about ransomware, CEO fraud and other social engineering tactics through a new-school approach to awareness training on security. Kevin Mitnick, an internationally recognised cybersecurity specialist and KnowBe4's Chief Hacking Officer, helped design the KnowBe4 training based on his well-documented social engineering tactics. Tens of thousands of organisations rely on KnowBe4 to mobilise their end users as the last line of defence.